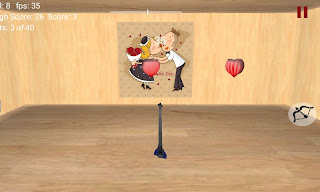 First Person Shooter 3D Valentine Game. Aim at the Hearts and tap on shoot button to release arrow. Every hit will be rewarded with a Rose and you get a score. Unending levels of gameplay. You have 60 seconds to complete each level. Shoot the Clock to extend playtime. Avoid shooting the Bomb. Happy Valentine Day!

Posted by iOSAndroidGameDev at 1:34 AM No comments: 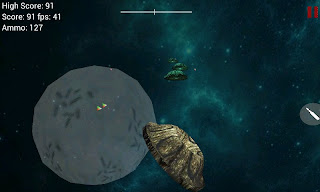 This game [Alien Ship Escape 3D] is the 3rd part of the Alien Strike 3D Series. You can play this part as standalone without reference to the earlier 2 parts.

1. Alien Strike 3D:
You were shipwrecked on a desert planet in a parallel universe and being hunted by alien predators. Your survival requires you to counter their strikes and battle them until you kill the Brain boss to gain access to their space ship with hope of returning home.

2. Alien Counter Strike 3D:
After defeating the Aliens in the desert war, you have ascended the white teleportal into the Alien spacecraft. Within the belly of the ship, you battled the Sentries. In the final battle with the Ship's Boss, you defeated it and took over control of the Spacecraft.

3. Alien Ship Escape 3D:
Now that you have taken control of the Alien Spacecraft you manage to pilot the Ship into outer space. But there you are met with challenges from giant Asteroids,
and enemy Spaceships. Your objective is to stay alive.  Good Luck!

Posted by iOSAndroidGameDev at 12:47 AM No comments: 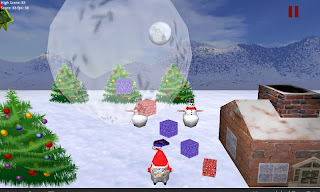 Help Santa collect all the dropping presents while avoiding the Snowballs and the Grinch. Collect the Candysticks to use as ammo and collect the Shields to defend Santa from the falling snowballs and the Grinch. Challenge your friends online for Top Score in Leaderboards via Heyzap social network. Controls: Tilt the phone/tablet left to move left and tilt it right to go right. Have a Merry, Merry Christmas!

Posted by iOSAndroidGameDev at 11:27 PM No comments: